Please read about the project here.

To hug, to warm up, to reassure, to treat: for hospital nannies every child is their own. 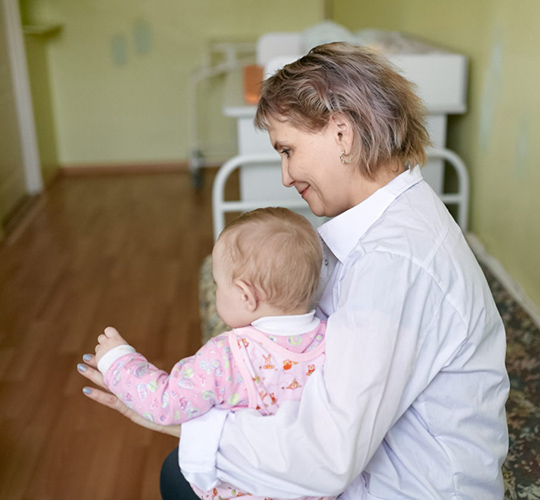 White walls, glass units with small metal cots inside. Tender smell of milk mixed with medicines. Nina’s and Alisa’s cots are perpendicular to each other. A bed for an adult is nearby. This bed is for a mother which neither of the girls has. However they have Lada who comes here every day.

Girls cough so loudly that you can hear it in your head and fear makes your heart ache. It is not clear how little bodies can bear such strong cough seizures.

“One month old Alisa was admitted in a very bad condition, with fever and pneumonia suspicion. She was wheezing and almost could not breathe herself” says Lada. “Oxygen was given and catheter for injections was put. But there were absolutely no veins on little arms. Nina was feeling a little better, but she also had fever and was coughing with whistling. She was seven months old but it seemed that she was only a little bigger than Alisa, she was as little as Thumbelina. I came to see the girls several hours after they were admitted and it all started – inhalation, drips, bottles, injections.

A nurse enters the ward from time to time, gives instructions and medicines. Apart from the girls and Lada there is one more 6 months old baby with fever. However he is with his mother all the time and does not let her go even for a minute.

“We are going to do inhalation in the ward today” says Lada to a nurse “You have a lot of newly admitted patients there, what if we catch the virus again”.

While Nina is in her cot, Lada is holding Alisa’s inhalation mask. At first this little person is kicking, wrapping her head and shouting. “Come on, come on” says Lada patiently, “Lungs are opening like this and the medicine is absorbed better”.

The girl becomes quiet as if she understands and breathes steadily and deeply. Touching the girl’s head with her lips, Lada confesses that she was always dreaming about this job.

“From childhood I was taking care of someone – at school and summer camp” she remembers. “I felt tenderness most for little children under four years old. They are the most defenceless, they cannot tell that they feel pain and are uncomfortable. And they are twice more vulnerable when they are without parents. I remember how in soviet times I was in the hospital with my little daughter. There were glass walls and we could see children without parents nearby. I told to myself that no child should be alone, especially when he is ill.

So that it is not scary

When several years ago Lada saw an ad about recruiting nannies for children’s hospitals, she remembered those children without parents she saw in the hospital. She collected the documents and passed the interviews. At first she continued to work as a hairdresser in her time free from hospital shifts. However soon she understood that it was not possible to combine the two jobs as she gives all her forces to the children in hospital wards.

Lada says that the best thing is to observe how children improve. When they are admitted to the hospital they look at you with mistrust. After a week or two they become calm and start smiling. For example you would not believe that Nina will need to return to her orphanage soon. She looks out sly-like, laughs, spits her dummy and tries to take your finger.

“On the first day I was thinking that she was not hearing or seeing. There was no feedback to my affection and tenderness” says Lada. But it turned out that she is a very responsive child. She loves massage. A massage therapist arrives, all children are crying but she smiles, stands still and is even afraid of breathing as she likes it so much. And she got better very quickly. Alisa is not feeling that well yet, but she is still little and it is difficult for her to clear her throat.

No one will be left alone

Lada tells that there are situations when a child has parents but they are not allowed to stay in the hospital. For example once Lada was taking care of a four years old Tanya for three weeks. During this time there was a question of who will take the girl after her discharge – her mother or guardianship authorities. The situation was strange – it was told that the mother was late with preparing lunch, the father started shouting at her, the child cried and their neighbours heard this and called police. The guardianship authorities took the girl until the situation was clarified and the child who was living in a family was admitted to the hospital alone. While the girl was treated, her mother and father were solving the issue and collecting documents. When they were coming to visit the girl, Lada was putting her on a windowsill to wave. Her father was crying and saying that they were willing to get Tanya back. And they got her back. After the treatment they went home altogether, and the mother and father kissed Lada and gave her a chocolate.

«That’s all, princess, now let’s go to bed” it is time to put Alisa and Nina to bed, however Lada is not rushing to leave them in their cots until she is sure that they are calm and falling asleep.

I treat them as my own children – kiss and pat them. It happens that I go to the corridor with them and other mothers tell me that a child looks like me.

Lada has her favourite child Marina with whom she is staying in the hospital from time to time for several years. The charitable foundation knows that if Marina is admitted to the hospital, this is Lada who will take care of her. Marina has a lot of deformities. She neither walks nor talks although she is already four years old. However Lada says she is like a firefly – sincere, smiley and happy about everything. Lada talks about Marina and smiles herself.

And once Lada was taking care of Ksusha who had a terminal diagnosis. Her mother was well groomed and successful and regularly visited her daughter. She brought nappies and clothes and cried. The mother had a special permission for visits. But she did not have any energy to take care of her daughter. Doctors advised her to leave her daughter in the hospital as round-the-clock observation and care was required. The mother was holding Ksusha, feeding, kissing her and leaving. She was telling thank you to Lada all the time. And the girl was only looking at one spot with her big eyes which looked like her mother’s.

“Sweetie, you’ve cried and fallen asleep” – Lada carefully puts Alisa in her cot and is worried that her shift is almost finished. She does not want to leave as every child should not be left alone, especially if they are ill.

Translated from Russian by Help Impact